A while back I got a request for a custom plushie, and not just any plushie, but one from the Pokémon series: Cufant.
Cufant is a Pokémon which was introduced in Generation 8 of the video game series, with the design of a cute yellow/orange elephant. When I first saw this Pokémon in my own version of Pokémon Shield I decided to name it “Fanta” after I caught it.

One of my friends also fell in love with this adorable elephant Pokémon, but was unable to find a plushie version of it. When they asked me if I could help them out with a custom design, I of course jumped at the opportunity!

When I’m working on a plushie that has to look like something that already exists in visual form the very first thing I do is research. “Cufant” isn’t a very popular Pokémon (which is also why my friend wasn’t able to find an official plushie for it), so I mostly had to get my frames for reference from videos.
The shapes and curves of “Cufant” are generally simple. The difficulty lies in the a-symmetric drawings this elephant has on its body. Even though it might look simplistic to the average viewer, it unfortunately doesn’t mean that it’s simple to recreate…

It took a bit of time to get in the right mindset again, because when this request came in I had not created an original plushie for quite some time. I used to be able to sketch comfortably and things would quickly fit together, but this time I had to do some tinkering before I could actually start on the creation process.

Like I said before, “Fanta” might look like a simplistic plushie, but it sure wasn’t a simple task to create a pattern for it. Since my first experiences with stuffed products were pillows, I made a certain work routine for myself: I first draw two-dimensional parts and then turn these into a three-dimensional model.
Unfortunately I noticed rather quickly that this wouldn’t work with “Fanta”, so I had to adapt and change my usual method.

It’s important to make a plushie look as much alike as possible when you’re working with something that already exists as a visual representation. But I’m very dependent on the fabric I can get my hands on. I personally love to work with “wellness-fleece”, but sometimes it’s really difficult to get this fabric in the colors you need.

Such was the case with “Fanta”, since “Cufant” originally has a more washed out yellow color, but “Fanta” has more of a copper orange color.
This was also the very first time I could use my new embroidery machine on such a strechy and fluffy material. With all of these things taken into account, it actually came out quite nicely for a first time using it under these circumstances, if I may say so myself. 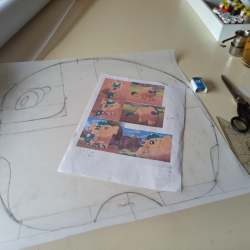 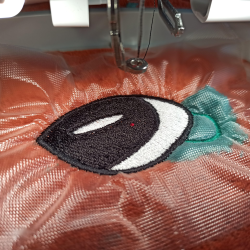 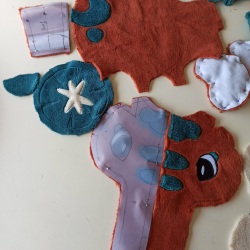 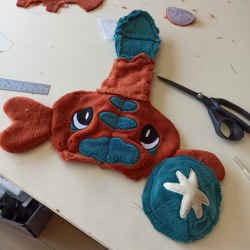 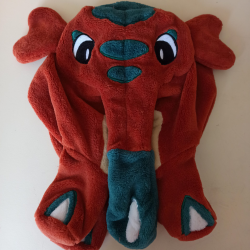 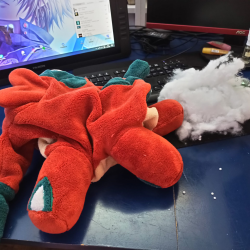 Now, with all of the preparations done, it’s time to start the real work!
My usual working order is to start with the assembly of all separate parts and the preparation of alignment. Once this is completed I can stick it all together and make small adjustments where needed. This is also the moment where you find out if your two-dimensional puzzle lines up and fits into a three-dimensional piece.
With “Fanta” it’s hard to determine which order to work in, because some of it’s components have to be created inside-out.

Luckily for me my skills weren’t as rusty as I feared they would be. This doesn’t mean I didn’t have to make any adjustments here and there though. I intended to create the three-dimensional effect with the help of darts, and steal some fabric here and there to make it look more rounded.
Yet, it’s still a gamble. You’re never sure if your plan will work out or not until you actually get to the assembly phase of a project.

In the end I have to admit that the process went pretty smooth, and the results are extraordinary!
The pattern ended up fitting quite nicely as the plushie started to form out of all the individual pieces. As a finishing touch the plushie got it’s “ANGRY JUICE” label and a certificate that proves “Fanta” was made by my hands, and was adopted by it’s new owner. (Who was absolutely thrilled and gave “Fanta” a warm and loving forever home!) 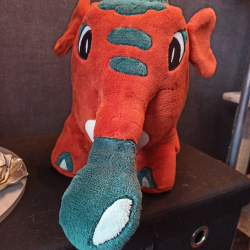 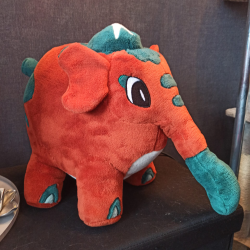 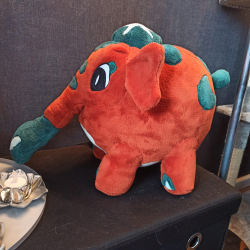 I’m very thankful that I got the opportunity to make you this plushie!

It was a great joy to create “Fanta”!

Do you also have an idea for an original plushie that you’d like me to make for you? Then click here!

This site uses Akismet to reduce spam. Learn how your comment data is processed.

I make plushies “in every color and flavor”, all handmade of course!
If you’d like to learn more about ANGRY JUICE, then please check the ABOUT page. ☆